“An animal’s eyes have the power to speak a great language.”

How do vaccinations work?

Vaccines work by stimulating the body’s defense mechanisms or immune system to produce antibodies to microorganisms such as a virus, bacteria, or otherinfectious organisms. The animal’s immune system is then prepared to react to a future infection with that microorganism(s). The reaction will either prevent infection or lessen the severity of infection and help promote rapid recovery.

Immunity is a complex series of defense mechanisms by which an animal is able to resist an infection or, minimally, resist disease and the harmful consequences of the infection. Immunity is not absolute. Immunity can sometimes be overcome when there is an overwhelming exposure to a high dose of a virulent or particularly harmful strain of the microorganism or when the animal is unduly stressed or its immune system is otherwise depressed, known as immunosuppression, by other infections. 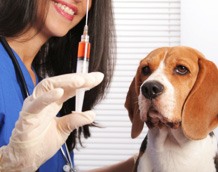 What is maternal immunity?

Newborn animals have not yet had a chance to make their own immunity, so they need protection against infections present in their environment. They receive this immunity from their mother. Maternal immunity is only temporary. It declines steadily over the first few weeks of life and is largely gone by 12 weeks. The rate of decline is variable depending on many factors.

Why is more than one dose of vaccine given?

Without complicated testing, it is impossible to know when a pup or kitten has lost the immunity it gets from its mother, called maternal immunity. An early decline in a pet’s maternal antibody can leave it susceptible to infection at a very young age, but a strong maternal immunity can actually interfere with early vaccination. The first vaccination is a “priming” dose, and subsequent doses are needed to boost the response to a higher, longer-lasting level of immunity.

Some causes for “vaccine failure” include: